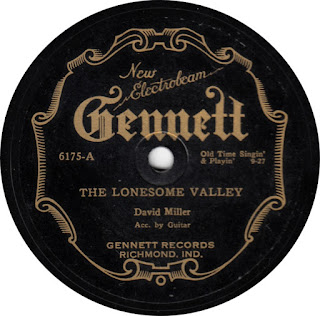 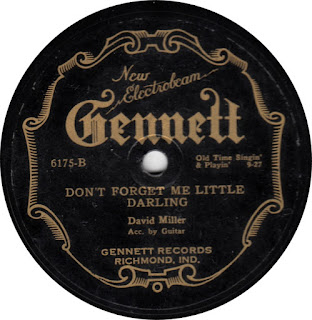 another one of Miller's recordings on Allen's blog:

An excerpt from the book Country: A Regional Exploration, by Ivan Tribe, 2006

"On Dec 16, 1924, in its Cincinnati studio, Gennett recorded the first country vocalist from West Virginia, a former national guardsman named David Miller (1893-1959), who lost his eyesight and was billed as "The Blind Soldier".  Like Puckett [Riley], Reneau [George], Miller usually earned his living as a street singer in Huntington.  Although the Tweedys and Miller recorded several sessions and did programs on radio, neither ever had the impact or success that the better known artists on the New York-based labels experienced."

An excerpt from the book  "Mountaineer Jamboree: Country Music in West Virginia", by Ivan M. Tribe, 1984, The University of Kentucky Press.

W.R. Callaway, a sometime Huntington resident and talent scout, wielded a guiding hand in the career of Miller and other recording artists from that area.

...Miller was not a West Virginian, but he had lived in the Mountain State for several years.  Born in the small Ohio river community of Miller, in Lawrence County, Ohio, on March 7, 1893, David Miller worked primarily as a laborer on a local fruit farm before entering military service in World War I.  Soon after joining the army, he developed granulated eyelids which caused eventual blindness, but he government turned down his pension request.

He had earlier moved across the river to the Huntington suburb of Guyandotte and taken up his music seriously to sustain himself and his family.  Known as "The Blind Soldier", miller developed a unique guitar style and possessed an adequate, albeit archaic and perhaps erratic tenor vocal style.  Much of his recorded work remains unreleased, leading one to question the evenness of its quality.

Miller placed a number of fine old ballads, hymns and especially antiquated popular songs on record over the next seven years but never attained much fame outside the Huntington area and relatively little even there.  He did play extensively on WSAZ, the local radio station, but often as part of a group.  The Gennett record label was the only one to use his real name, and they sold fewer copies than Champion, on which label he was known as Oran Campbell, or as Dan Kutter and Frank Wilkins on Sears Roebuck releases.  All of Miller's 1929 Paramount releases used the pseudonym Owen Mills, and on his 1931 work for the American Record Corporation, sometimes only the nickname "The Blind Soldier" appears on the labels.  Although Miller remained active until just a few years before his death on November 1, 1959, he remains little known even to that small fraternity of dedicated old-time record collectors.  This is unfortunate because Miller constituted one of the most traditional singers and guitar players ever to record, even in the earliest years.  His repetoire, for instance, included such material as an early white version of the Negro ballad "That Badman Stacklee", the old sentimental Civil War song "Faded Coat Of Blue", "It's Hard To Be Shut Up In Prison" (a variant of traditional "Logan County Jail" and the guitar instrumentals "Jailhouse Rag" and "Cannonball Rag".


Don't Forget Me Little Darling:
https://picosong.com/wgrJr/
Posted by Derik at 7:02 AM 2 comments: 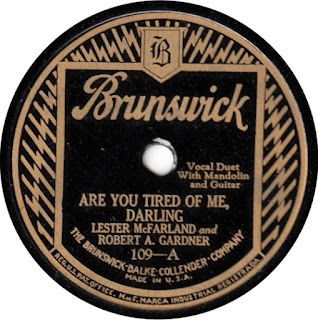 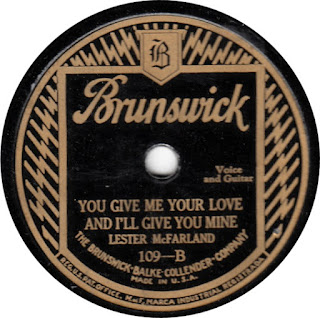 
Are You Tired Of Me, My Darling
https://picosong.com/wgGf4

You Give Me Your Love And I'll Give You Mine
https://picosong.com/wgGfQ

Those on my email list will be sent a link to download extra Mac and Bob songs.
Posted by Derik at 10:05 AM 3 comments: