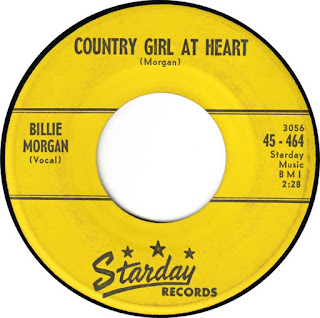 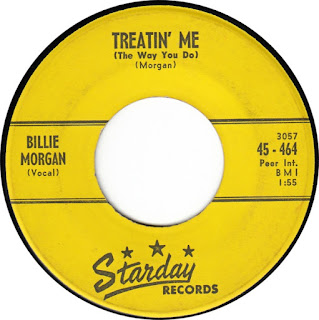 excerpt from Nate Gibson's wonderful book, which anyone needs to read if they are interested in Starday:


"Among the first at Starday’s doorstep was Billie Morgan, a raspy-voiced thirty-six-year-old mother of four.  Morgan grew up and lived in Nashville, though her singing style is more commonly associated with the Texas honky-tonk sound. Nashville session fiddler Dale Potter recognized her talent and brought her to the Starday offices.  Potter knew that Pierce was looking for the more traditional country artists and was impressed with her songwriting credits, which by 1959 included over 150 songs. Pierce was also impressed and signed her on the spot. Her first recording session was three days later and within ten days her first record, “Life to Live” (420), co-credited with Potter, was released in January 1959. The song, a stirring answer to Stonewall Jackson’s “Life to Go,” hit the Billboard charts on March 23, 1959, peaking at #22. Though only a modest hit, it significantly gave the new Nashville-based Starday its first taste of national radio exposure."

Treatin' Me (The Way You Do)
http://picosong.com/zzig

Thanks for these.I love her voice.Any more?Does anyone know what became of her.Any photos of the lady?Internet research turns up hardly anything.

Last lived in Maben, MS with her husband.