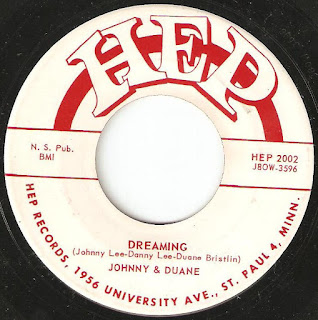 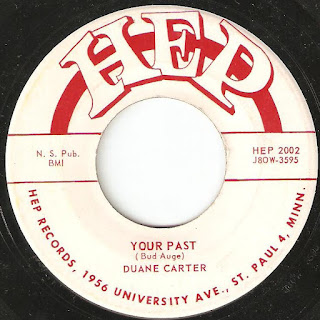 I sat down with Red Johnson last week at his home in Champlin, Minnesota.  Red was co-owner of the Hep label.  He gave me a lot of information about the Midwest country music scene in the 50s and 60s, as well as a stack of 45s and one 78, which I will post soon.  In a follow-up email about this record he wrote:

Derik
Duane Bristlin" Carter is the same person He changed the spelling to Duwayne I think, Johnny Lee is me at the time I was working with Danny Lee "Danielson" on steel guitar and we thought we would go by The Lee Brothers such as The Wilburn Bros and The Louvin Bros (who were popular at that time) and did for awhile but when the association ended and I picked up the stage name Red Johnson and still use it today.
This recording was made about 1958 and was recorded above a store on university ave in St Paul by a recording Co from Rochester, I don't recall his name, but he set up and put the control board in the bathroom for more sound isolation.
Musicians on this session were as I remember Dick Gatzke on Steel & Mandolin Art Monson Lead Guitar, and most likely Bob Kolhoff on doghouse bass, and Eddie Adams played fiddle, with Woody Sorenson on Piano. Danny Lee played guitar as well. This was a Fred Stevenkin (owner of North Star records) session but it wound up on HEP instead of North Star, I don't remember any details, but there were 4 songs recorded at that session being: Your Past with Duane Carter, Change with Red Johnson, Can You (A Julie Zappa song) Red & Duane and Dreaming.
I think about 1000 were pressed and I don't know of any more although there might have been. The numbering was different than the later HEP records, these were before I became a partner but when I joined HEP as an owner the numbering changed  ans began with Bud Auge and my Birthdates 1929 for Bud Auge and 1932 for Red Johnson thence starting with 2932.

Thanks for asking,
Red Johnson

A 2nd email from Red:

Derik,
That's a nice post. The address on these recordings is Fred Stevekin's address, I don't know what Fred and Bud Auge agreed on but I know HEP was born about that time. HEP was a takeoff on a saying at that time which was "Get Hep" or get with it, Others maybe can help me fill in some of the blanks on the history of HEP and I for one would welcome any memories someone may have and want to share. I did not buy HEP from anyone I adopted it and helped it financially all I could,And In 1965 I think, after "There's a Grand Ol Opry Show Playing Somewhere" We went to Nashville and recorded "Hidden Feelings" which became a hit as well and on the strength of that record we Incorporated, and recorded several people at that time. Other songs on the Nashville session were "Big Brave Me, Anything But Me & I'd Rain All Over You" Good songs in their own right.

Red Johnson
Posted by Derik at 8:37 AM

Thanks I did not have this one. Always loved the Hep label since hearing the fantastic Homicide by Myron Lee. Maybe you could do a HEP label topic for Rockhall.ro That be real nice