I grew up in Minnesota, just about a mile from the river. I don't eat the catfish from there, but I still like to catch 'em. Sometimes I hum this tune when I'm out in my canoe with a big piece of stinky catfish food on the end of my line.

This is a b-side to the a song called Tonight, Let's Sleep On It Baby which was released in 1980, two years after Mel committed suicide. Guess hauling in the big cats sadly wasn't enough to convince him to stay in this world.

I don't usually listen to country music made after about 1970, but when I saw this 45rpm I couldn't tell what year it was made. It looked older, and I originally thought 60s. But it's not a bad tune, and I don't regret taking it home. 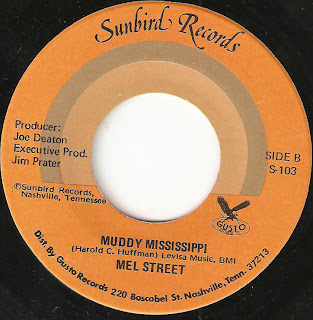 Thanks for the inspiration to play this track again - the more publicicity given to Mel Street the better. He remains one of the most under appreciated country singers of all time.

You're welcome. thanks for listening