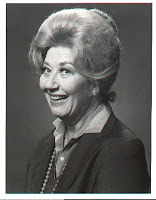 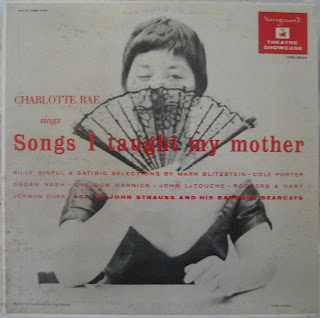 This is one of the prize gems of my record collection. A rare record indeed. If I say the name Charlotte Rae, you probably wouldn't flinch. But if I say Mrs. Garrett, from the sitcom The Facts of Life, everyone pretty much smiles. She was a real hoot on the show, and most of us wished there was a Mrs Garrett in our youth to guide us.

When she was a young girl, Charlotte Rae moved from her small Wisconsin beginnings to the big apple, and the bohemian scene of Greenwich village. She acted, sang and danced and generally did what everyone else was doing in the folk/hootenany coffee shop/club scene. And in 1955 she made this album, the only one she would ever make. And it is not like many other records out there. Part theater, part comedy romp, part musical extravaganza. The amount of energy exerted on these recordings is exhausting. I need to stop and breath between tracks. If only she and Tiny Tim had gotten together to make an album, it would have been great.

This album was reissued on cd last year. 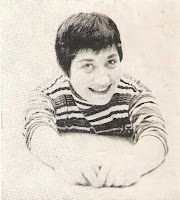 Amazing and witty collection, thanks for posting!!

Looks good, but Rapidshare says this is only available for premium members.

Maybe you want to use a different service next time?

Well, 63 people have downloaded it with no problems yet. Might try it again.

Thanks for stopping Derek. I visited your blog a lot before starting my own. Of course I couldn't use the same name!

Hi, Derek. Nice to see your Charlotte Rae album on the blog. I agree that it is simply wonderful. In fact, I have been working my ay through the album in a series of covers if you are interested in a laugh...go to ladyvestapattywhack on youtube. Nothing gives you more appreciation for someone's work than trying to sing it yourself. By the way, you forgot the word "little" in "Merry Little Minuet".

On the album, the song says "Merry Minuet", not "Merry Little Minuet".

Right you are! I was looking at the re-issued CD and it says "Merry Little Minuet"...and now that I compare it with the original album (which FINALLY came in the mail today!), I see it does NOT include the word "Little". My apologies!