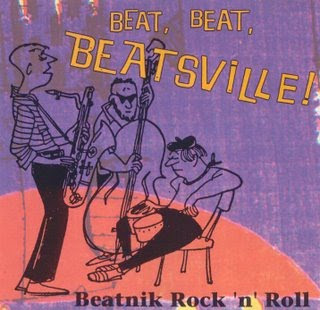 In 1995 I walked into a record store in downtown Minneapolis called Let It Be Records. The store is now closed sadly, but it was a great place to find eclectic music, on vinyl and cd. I found this cd that day, called "Beat Beat Beatsville! - Beatnik Rock N' Roll." It has proved to be one of my most played cds since. Every couple of years I pull it out and play it through and thank myself for buying it. I have not seen the cd in any store since, nor known anyone who has owned it. I have never copied it to give away to friends, always keeping it a secret.

I wanted my first attempt at a music blog to be about Dylan, but this CD is something that is just so good and rare that it rose to the top.

Also released on vinyl, the cd contains more tracks, and is a poke at the whole beat lifestyle. By the late 50's the idea of a beatnik was known by all. A household word, as they called it back then. Madison avenue latched onto the concept after On The Road came out, and popluar entertainers started doing there impressions and caricatures based on the stereotypical beat hipster. Even on the Burn's and Allen show there was a episode where a teenage beatnik comes to visit them at their house and talks to them in the beat lingo and they all end up dancing around the living room to "modern music".

Getting to the point, this Cd is a collection of songs, poetry readings, and unclassifiable funny bits that represent accurately how the beats were spun at the time, and what people thought about their lifestyle.

The first track on this disc is a sound bite from an episode of "The Munsters", where Herman invites beatniks over to his house (if that is what you can call their dwelling), showing them he is one of them by doing some free verse. The rest of the tracks are garage bands playing weird wild music with strange lyrics, telling stories, and stopping to read a verse or two in and out of the sounds. The characters in the songs are true to the stereotype of the time, complete with rolled up jeans and "transistor radio in hand".

The CD comes with some good linear notes and also something on the back:

Hey daddy-0!! Don't hand me none of of that Kerovac (sic) drag and Ginsberg jive. That's drag-city! These are the sides I wanna hear. So what if they're all a put on?! Big deal. The whole Beat Generation was a put on right from the beginning anyway. Man, I'll take Maynard G over Jack K anyday. Or the Wildman of Wildsville (Lord Buckley guesting on Benny & Cecil dig?!). Those cats know where life's at. Get hip. This is the real score, the platter that puts the beat back into beatnik. Endsville.
Then there is an old advertisement for John Begg Scotch (made in Glasgow) that gives tips on how to beat it.

Things you need when beatnicking... 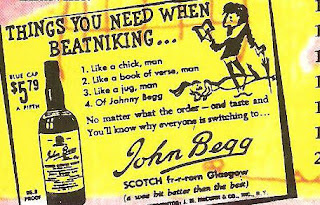 So grab a bongo drum, light a smelly candle and have your parents send you a check for $7 to pay the rent for the next month.

Track 11: Guy Lombardo's Back In Town

Bonus Track From Me: The Beat Generation (performed by a group called Bob & Don). A cover of track 19.